Why is Tom Green Judging the Miss Universe Pageant? 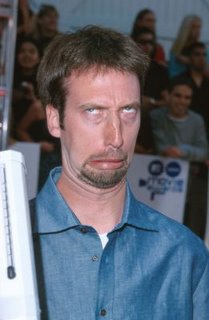 I suppose the better question is, why am I currently watching the Miss Universe pageant? Why did I TiVo it? But let’s let bygones be bygones and deal with the issue at hand: why, oh why, is Tom Green judging it? Some of the judges make perfectly good sense: Bridgette Wilson Sampras, a former Miss Teen USA; Patrick McMullan, photographer and socialite extraordinaire; or Amelia Vega, Miss Universe 2003. Some of them kinda-sorta make sense, like Santino Rice, milking that Project Runway stint until there ain’t nothin’ left; or Marc Cherry, who singlehandedly reintroduced pop culture to campy with the first season of Desperate Housewives; or Claudia Jordan, a relative unknown but at least a model; or even James Lesure, who people tell me is some manner of actor. Moving another huge step down the ladder of pageant relatedness we find Sean Yazbeck, the adorable Brit who won this season’s Apprentice (he called some dude a “wanker” during an interview and I have loved him ever since), who is at the very least international (and his presence is in large part explained by the fact that the Trump empire finances all these shenanigans), and NFL great Emmitt Smith, who has probably banged a lot of hot chicks in a lot of different countries.

Then we have Tom Green. Tom. Green. As far as I can recall, this guy hasn’t even seen the inside of a studio since 2002 (an IMDB check reveals that he’s done some cameos and failed pilots to pass the time), and the last time he was even marginally relevant to pop culture, he was singing — poorly — about all the places his ass had been. Even when we loved him, we loved him as a sort of national class clown, as the antithesis of everything beautiful and classy and articulate and helpful.

Now let’s say you’re a Miss Universe contestant. You’ve probably been on the pageant circuit your whole life, wearing bright red lipstick and earrings half the size of your body at age five in the Little Miss Bangkok competition, casting aside best friends and boyfriends and after-school sports and slumber parties and your family’s savings in the single-minded pursuit of this dream: you wish to be, for a year, recognized as the woman in this world is the very most beautiful, classy, articulate and helpful.

How does this happen? Could they really find no one better? Does Donald Trump have some sort of vested interest in Tom Green’s career? Does anyone? Did someone more appropriate pass, like Paul Reubens, or oh, say, John Ramsey? I understand that folks aren’t exactly lining up to get on board Mr. Trump’s sinking ship o’ pageantry, but Tom Green?

I welcome your thoughts on the matter.